Orfox Paved the Way for Tor Browser on Android

Mobile browsing has increasingly become the primary way many people go online. In 2014, Tor Browser was used by millions of people on their desktop computers, but there was not yet a way to use Tor on a mobile device. We have long recognized the need for protecting people's rights to privacy and freedom online, including on mobile devices, but as a small nonprofit organization, we were not yet ready to meet that demand. That's when our friends at Guardian Project began exploring the possibility of providing Tor Browser on Android themselves. Their answer was Orfox.
Orfox was first released 23 September 2015. Over the next three years, Orfox continuously improved and became a popular way for people to browse the internet with more privacy than standard browsers, and Orfox was crucial for helping people circumvent censorship and access blocked sites and critical resources. It was installed over 14 million times, and maintained over 1 million active users.
In late 2017, we began working on our own Tor Browser for Android. Because of Orfox's success, the development path for us was clearer and more in reach. We were able to build upon Guardian Project's work and bring a browser with the full protections of Tor Browser to Android. We released the alpha version of Tor Browser for Android in September 2018 and launched the stable version this May.
After nearly a year since we released the alpha version of Tor Browser on Android, the time for sunsetting Orfox has come. 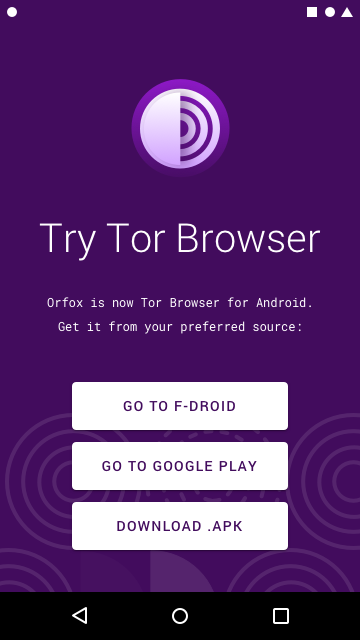 If you still have Orfox installed on your device, Guardian Project will be releasing one final update to Orfox that will direct you to download Tor Browser.
We are grateful to the work of our friends at Guardian Project and members of our community, including Amogh and Nathan (n8fr8), who helped pave the way for Tor Browser on Android. Please join us in wishing Orfox a fond farewell.
Tags
Orfox
tor browser for android
android
mobile
Guardian Project

Very dissapointing that you…

Very dissapointing that you force users off a working app into a nonworking app.

Who allowed the new release out without testing and why?

The rest alienation of the community that supports you and your efforts.

Hopefully you will redeem yourselves with a quick resolution.

And the tor browser doesnt…

And the tor browser doesnt open anything other that duckduckgo

I'm a software developer and…

I'm a software developer and I get it that the breakage want planned and that it is an unfortunate coincidence.

But I think response to the unfortunate coincidence could be a bit better.

Why not ask orfox developers to temporarily reenable app so purple can continue using it while the breakage is fixed? Why not revert Tor Browser to a previous version (assuming that breakage is a change in the app and noir a third party beyond your control)?

And why do such a hard orfox cut off? Why not issue update that is still functional, but every tone you launch it, it would tell that the project is no longer supported and to recommend to use Tor Browser instead. But still continue to work and let people switch at their convenience.

That's where things went a bit wrong.... The technical breakage is unfortunate, but understandable.

The final Orfox app was…

The final Orfox app was actually an Orfox update, otherwise Orfox users would not have got it. So, I am not sure what you mean be "reenabling the app". It never got disabled. Or maybe you mean getting the browser back in yet another update? I supposed it would have cost the Guardian Project more time to do that than us to get 8.5.6 out (although that took way longer than I liked).

We tried to stop the update on Google Play so that not all users got updated to the new version. But that did not seem to be possible. So, the only way to fix the breakage was to roll out a new version. And, no the previous version would not have worked due to Google's 64bit requirement which got enforced on Sep 1. That's the only reason we needed to rush into this issue anyway with an Firefox 60 that actually does not support aarch64 yet (as you have witnessed).

The Orfox browser was not supported for months anymore it got a ton of public security vulnerabilities meanwhile. So, it was time to finally shut it down.

so it is now the the 7th of september in much of the world....any news on when a stable version will be out? thx, great effort, huge misstep by disabling orfox b4 fully verifying , but u will recover ur stride

That is very gud and amazing…

That is very gud and amazing,it work greate.but the tor browser is not working its only the alpha tor Brower that is working,so can I unstalling the orfox and the tor browser so I shall allow only tor alpha browser?
Thanks

Orfox was killed and the TOR…

Orfox was killed and the TOR browser crashes immediately upon opening. What a clusterfuck!! Now I am unable to access the DN at all!! So what has worked perfectly for years has been undone in an instsnt, and now I can't access at all. Seems like maybe you would have given this piece of shit a thorough test run before disabling what has worked flawlessly for years. Thanks for your shortsightedness(sarcasm)!! When can we expect a fix???

Please reinstate Orfox so us…

Please reinstate Orfox so us Android users have access while a fix is worked on. Please!!

Would be so nice if I had a…

Would be so nice if I had a notice to back up my bookmarks and such before you all released a completely useless piece of software.

Thanks for all of your…

Thanks for all of your efforts team, they are massively appreciated. Unfortunately the forced closure of Orfox and significant bug in Tor Browser (causing immediate crash of the app on some common platforms) at the same time does shine a light on you at the moment. Hope you resolve the issue without too many sleepless nights and look forward to reading about the lessons learned! Good luck.

Tor Browser 10.5.2 is now available from the Tor Browser download page and also from our