As reported, Tor was partially blocked by China on September 25th or so in anticipation of the CCP October 1, 2009 60th anniversary.

Here's what one directory mirror recorded for September, 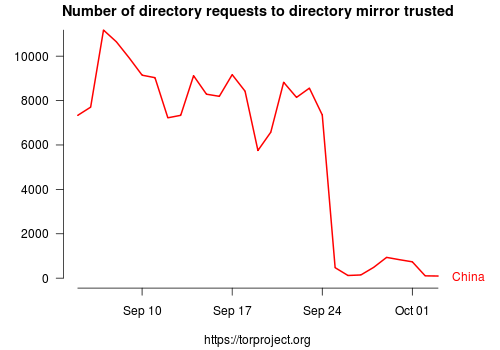 And here's the growth of bridge users in response. Alas, like our graphs of bridge use in Iran in June 2009, we only have relative counts for bridge use, not absolute counts. But with a 70x increase in a week, we are talking about 10000+ bridge users: 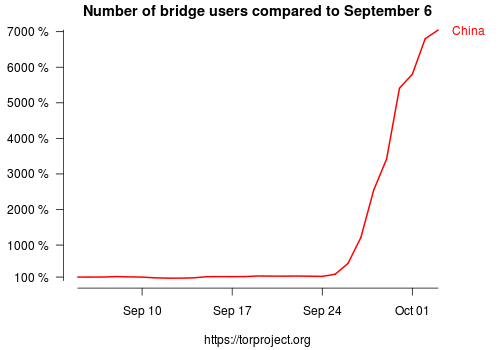 in PRC , using bridge ,over

in PRC , using bridge ,over the GFW !

Looking for a bridge

Hi I'm in Beijing, and was

I'm in Beijing, and was using hotspot shield until it got blocked for the 60th Anniversary.

I managed to get connected to the TOR network using Vidalia and bridges (The TOR onion is green).

However, i'm still unable to browse the the restricted websites. In fact, i'm not able to browse anything after enabling torbutton.

Can anyone please help me?

I think you are missing

I think you are missing Privoxy ;)

I can't understand why China has blocked Tor...or maybe I understand. I was also unable to use TOR when I was in Beijing last month and have no idea how to solve the problem.

Visit this page directly from China

I've requested bridges last few weeks but it didn't work, finally I got useful bridges from Zuola. How does it happen?

What a foolish think for the Chinese Government to do

I feel blocking Tor was a mistake. I've never used Tor but understand how it operates and have it installed on my Ubuntu Linux console. It is an effective way of bypassing government surveillance.

Carry on Tor Project, carry on.

Who send me a copy of bridges?

I don't find the bridges application except the site as https://bridges.torproject.org/. That site I can't access. who can give me one copy? pls send my email address lukeay@yahoo.com.

thank you in advance!

I still can't connect to a

I still can't connect to a relay directory in Bejing.

send email containing BRIDGES as content by GMAIL to bridges@torproject.org. You'll get three bridges each time. And you can send multiple times to request more. Good luck.

Run a Bridge Server in China

I'd like to run a Bridge server in China, to make the communication more stable. Sadly, Vidalia disagrees and tells me I cannot run a bridge, when I have no "free access" to the internet (and I guess here is meant, that I do already communicate via bridges).
Is there anything I can do? How to help?

Hi, I noticed the

I noticed the tor-blocking as well. Now I have a general question about tor's safetyness:

When it is not a secret, which servers are tor-servers (even many bridges didn't work and were known by the government), then every Tor-entry-point can distinguish between usual-IP and tor-IP - right?

Isn't it the easiest way, just running a TOR-Server to get IP-addresses from tor-users? Also, as long as the websites don't support https, the can see the visited websites.

Am I right? Am I wrong? How can developers fix this problem?
Would be glad for expert-answers.

how safe is tor?

No answers?
Who knows something about enry-point-safetyness?

When coloured people can become the president of US, do you think that US is the salt of the world democratic society? Well,let's see.We Chinese people do not expect Obama has an all-seeing eye,but as the president of US,Obama shoud see China has too many "coloured" things to cover truth. If Obama won't mention Tibet in last saturday Asia speech( he didnt'mention), he should, at least,don't swallwo all the "coloured cookies" (fallacy upon fallacy to cover any thing real),which is prepared for him for his China tour.

To address a backlog of China questions

If you are running Vidalia on Mac you cannot build bridges; at least that is what the documentation tells me.

All torproject download pages are blocked.
Privoxy has been blocked since early summer.
Popilo? Who knows... can't download update to use it. ;o)

what documentation tells you this?

I am in China now. The

I am in China now. The bridges not working very good these days. I can only connect to tor network using the cache in local. I wonder if the bridges would be blocked some day.
Is there anybody can tell me? Thanks.

I need a bridge to link tor

I need a bridge to link tor network!
lol
Who can help me.
Send to wind_alucard@qq.com please.
Thank you so much.

I must say thanks to the

I must say thanks to the tor-project. The tor give me who a Chinese a window for the freedom in internet.

It looks like almost all bridges have been blocked these days.God damn it!

Any possible way to keep

I've sent several get bridges requests and checked the website for bridges via another html based proxy. I always get the same stuff, it's really hard to connect to facebook. ;(

This consistency is by

This consistency is by design to make it more difficult to enumerate all of the bridges available via that method (smtp or https).

Tor Browser 12.0a1 is now available from the Tor Browser download page and also from our distribution directory.

This year, the Tor Project must raise $75,000 to ensure we can smash Tor bugs and conduct needed maintenance. We need your help!