Tor is a labor of love, built by a small group of committed individuals, but we’re lucky to have the support of a dedicated volunteer base who help us make Tor the strongest anonymity tool out there. Today, we’re highlighting one volunteer in particular, Damian Johnson, aka atagar. 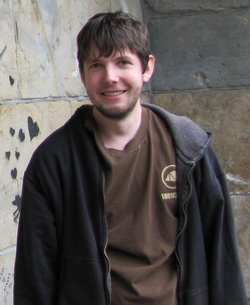 Damian has been contributing to Tor since 2009, when he was developing a real-time relay which started as a Google’s Summer of Code application. “Though I'll need to pull back the time I contribute to Tor,” he wrote, as summer drew to a close, “I'm still hoping to stay active in the community.”

We’re so glad that Damian has done just that and become so central to Tor. In the past eight years, he has continued to develop arm (which just got a big overhaul, and is now called Nyx) and Stem, a Python controller library to use with Tor. He also graduated to running Google’s Summer of Code for six years, runs DocTor, a tool which monitors relay consensus health, and helps us run Tor’s many mailing lists, and helps onboard new core Tor members.

We’re grateful to Damian’s commitment to internet freedom, and for rolling up his sleeves and helping to improve Tor. Thank you, Damian!

Getting involved with Tor is easy. You can help us make the network faster and more decentralized by running a relay, especially if you live in a part of the world where we don’t have a lot of relays yet.

“The best defense for civil liberties is to deny centralized authority the power it needs to restrict personal freedoms,” Damian wrote in his GSOC application in 2009. “Privacy is a vital part of that.”

That’s still true today. Tor is a vital tool for protecting privacy and resisting repressive censorship and surveillance. If you can, please consider making a donation. Mozilla is generously matching every donation up to $500,000, so now’s your chance to double your impact.

well , this Volunteer Spotlight article is nice , hello atakar.
( > “The best .. today. " is an american point of view , very fun)

You can help us make the…

You can help us make the network faster and more decentralized by running a relay, especially if you live in a part of the world where we don’t have a lot of relays yet.

Please provide documentation on trac about examples of typical places where new relays are sought and if possible with some providers and past experience. That would be more than enough for a lot of us to run relays in new places.

This would be an excellent…

This would be an excellent idea, I'll try to get this information put together. The short answer is that Tor's speed and capacity in the Global South is reduced because we don't have enough exit relays across the Global South.

Here are the only two…

Here are the only two examples from the GoodBadISPs wiki on trac:

I remember his timely and…

I remember his timely and funny emails.

When you were just my little…

When you were just my little son, how many times did I straighten out your shirt and jacket before we left for school, Damian?

Are you still putting on mismatched socks?

~ bad spoof, not even

Hello, can I send cash to…

Hello, can I send cash to the bank address listed in Germany? Will they actually deposit it? Thank you Tor and Tails :)

We encourage respectful, on-topic comments. Comments that violate our Code of Conduct will be deleted. Off-topic comments may be deleted at the discretion of the post moderator. Please do not comment as a way to receive support or report bugs on a post unrelated to a release. If you are looking for support, please see our support portal or ways to get in touch with us.

END_OF_DOCUMENT_TOKEN_TO_BE_REPLACED

This post was originally published on Micah Lee's blog.

Learning more about our users

At the Tor Project we practice user-centered design.

Tor Browser 10.5a11 is now available from the Tor Browser Alpha download page and also from our

Tor Browser 10.0.12 is now available from the Tor Browser download page and also from our